I'm back this evening to end this latest COMC series, which is good since it won't be long until Black Friday/Cyber Monday time when I'll be loading up once again.

Today's the big finish for this haul, with cards scanned in groups because I originally planned to split them up into smaller posts before realizing that would just drag things out unnecessarily.  On a day that mark's the birth of one of college's top 10 players of all time, Charles Woodson (who's not included in this post) let's have a look at the remaining Michigan Football hits:

Scans 1 and 2 include WRs and RBs, with this one covering the verticals.  Outspoken wideout and guy who can't keep his foot out of his mouth Braylon Edwards gets three new jersey relics added to his total (now 85, good for third place), including a multi-color swatch from 2010 Epix.

You'll see A-Train again in a minute (with his partner in crime), but for now have a look at a simple jersey card from 2002 Pacific.

And another wideout also gets one of multiple appearances in Marquise Walker, who shares a 2002 Playoff Honors card with Bucs RB Travis Stephens, a guy that outshone Walker by catching his only pass in one NFL game. 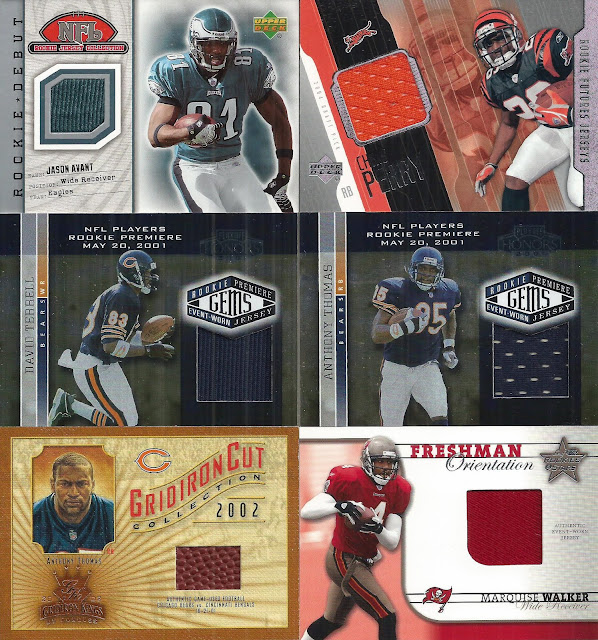 And now for the horizontals.  Sure-handed receiver Jason Avant leads things off with a simple jersey from 2006 that I would have sworn I had if I hadn't checked.  Nope, it's new to me and it's hit #60 in his collection, one of a few fun milestones today.  Also, you can ignore the Chris Perry jersey, which looks great and would be nicer if I didn't already own it.  Oh well, trade bait!

Last up in this bunch is jersey this time of Walker, hailing from 2002 Leaf Rookies & Stars.  Again, we've got a simple design but a nice, bold jersey swatch, and you know I pick these up super cheap; I pretty much aim for $1.50 and under when it comes to "game-used" stuff.  The guy who wore #4 gets his 24th hit out of 63 overall cards. 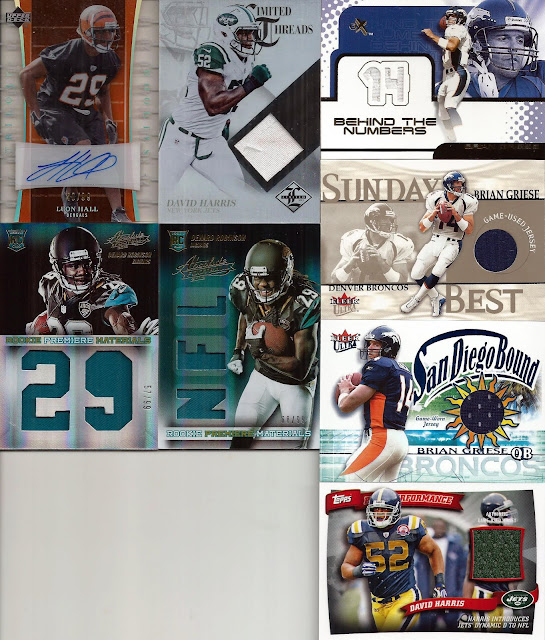 Now we'll shift gears a bit with a scan that covers defense and QBs.  I rarely get enough of the D side of the ball to justify its own post anyway so I have to group them in somewhere!  As far as those go, we'll start with Leon Hall on an acetate auto out of 2007 Upper Deck Trilogy (#40/99).  This is one of those cards that's difficult to scan so if I didn't point out that it's clear you wouldn't know.  An autographed parallel of his RC from the product, it gets me to 39 Halls.

Joining him on defense is tackling machine David Harris.  We just saw the star LB in the inserts post, and how he's back with relics designed in both orientations.  Up top is a shiny 2012 Limited Threads jersey (#92/99) while a 2010 Topps Peak Performance Relic sits in the bottom-right corner.  Autographs are always better but I take what I can get with defensive players, and I'm happy to move up to a solid 31 hits (84 cards overall) of the former Jet/Patriot.

Though he played RB late in his college career and during his short NFL tenure, I still count Denard Robinson as a QB, so here he is.  Above you can see a pair of 2013 Absolute Rookie Premiere relics I scored featuring Shoelace, with one being the Oversize Jersey Number variant (#57/99) and the other spelling out "NFL" (#68/99). I now count 44 hits in my Denard collection, and a milestone-worthy 101 overall cards thanks to this pair!

Moving on to a guy who enjoyed a longer NFL tenure, you can see three horizontal Brian Griese relics along the right side of the scan.  All of them hail from Fleer brands:  2001 E-X and Ultra and 2002 Ultra.  Griese's relics that I find tend toward basic designs since he wasn't a big factor when those cards got a bit more interesting.  He's still a pretty big deal in my collection, though, at 23 hits and an almost-milestone 198 overall items. 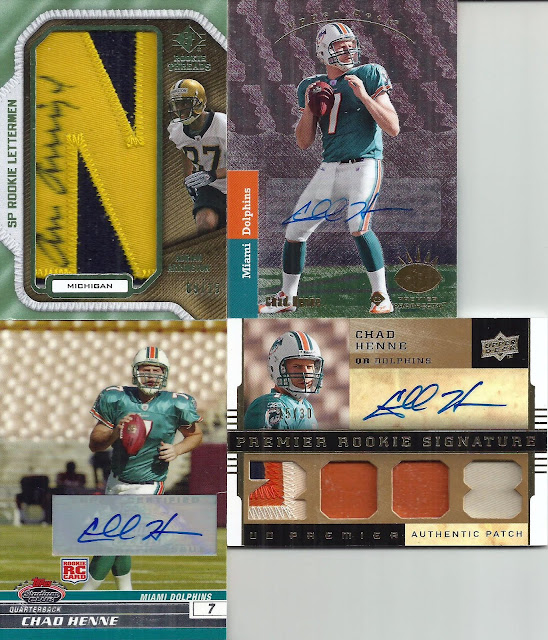 The last two scans fall into the category of "the great 2008s," my favorite Michigan draft class, rivaled only by the guys chosen a year earlier.  I couldn't tell you which scan I prefer because both are amazing, and anyway, I don't have to!

Starting us off is a new 2008 SP Threads manu-letter auto of WR Adrian Arrington.  I haven't been able to complete his base set, last name nameplate yet as I'm short three of the nine cards, but I now have my second letter from the College Autographs version, which--get this--spells out the college's name.  I can add this "N" to an "I" I'd previously scored, putting me a quarter of the way toward that one.  It'll also reside in double-A's PC, which stands at 55 hits (#7 overall) out of 89 cards.

And then there's blog favorite QB Chad Henne with three new signature items.  First is a 2008 SP Rookie Edition auto that honors the '93 SP design.  I'll need to chase down the other three at some point.  Next is a signed version, featuring a cut out window for the main event, of his 2008 Stadium Club rookie.  I now own one of these for all five Wolverines in the set:  Henne, Arrington, Jake Long, Mike Hart, and Mario Manningham.  Maybe I'll show off all of them together at some point.  For now, though, the showstopper is a 2008 Upper Deck Premier quad patch/auto (#15/30) of the journeyman QB.  My purchase history says I plunked down a measly $4.21 for this beauty, and I'm glad I did!

Henne continues to the the charge with a crazy 128 hits (still the only guy above 100 for now) and an almost-milestone-ish 296 overall pieces. 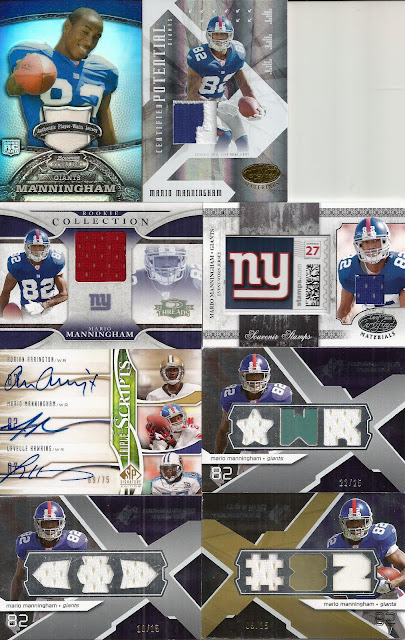 Speaking of crazy, today's big winner has me celebrating too many Manninghams!  That's eight, count 'em, eight new hits of the super WR.  We'll take a run through them in a few groups.

Next is a 2009 SP Signature triple auto card starring the man himself, former teammate Adrian Arrington, and...Lavelle Hawkins.  I guess the latter was also a 2008 draftee with the letters "A", "I", and "N" in his last name?  Anyway, I love cards with multiple Wolverines, and this one fits the bill.

Last up is a trio of 2008 SPx multi-jersey cards, adding to my huge collection from that product.  A quick check tells me I have 41, covering the vast array of variants like these three:  "Star and Position Dual 25," "Unique Shape Triple 15," and "Jersey Number Dual 25."  That's right, UD came up with a design and didn't know what the hell to call it either!

This was an insanely fun way to close out another fantastic haul for my collection, and it makes Manningham just the second player to hit the 90-card mark at 93 hits (216 cards overall).

As always I had a blast hunting down and scoring new pieces for my collection and I'm looking forward to doing it again in just a few weeks.  But before then I have lots more to cover, so be on the lookout for more posts here soon!
Posted by Dennis at 9:00 PM