What a difference a couple weeks can make!  Just two Fridays ago I took the day off from work again to head to Taylor for my monthly show, and though it had started cooling off, we managed to hit 60 that day, which we'll be lucky to get at this point going forward.  Chilly weather aside, I'm happy to be back today posting the spoils of that show.

This time I think I ended up staying a bit longer, leading to my spending a yearly high of $60.  That may also have something to do with my favorite seller making everything half off its usual price.  That meant that the stuff that was usually $2 or $1 was an even better value, and cards I'd otherwise ignored came home with me this time.  I believe the breakdown was 39 cards for a buck apiece, 38 that were $0.50, and 40 from the 20/$1 box.  Whatever the precise numbers were, I was elated to get out of there with a few things for myself and a lot of good value in terms of trade bait.

Speaking of stuff not for myself, let's kick things off as usual with cards that are available for trade that weren't ticketed for trade packages: 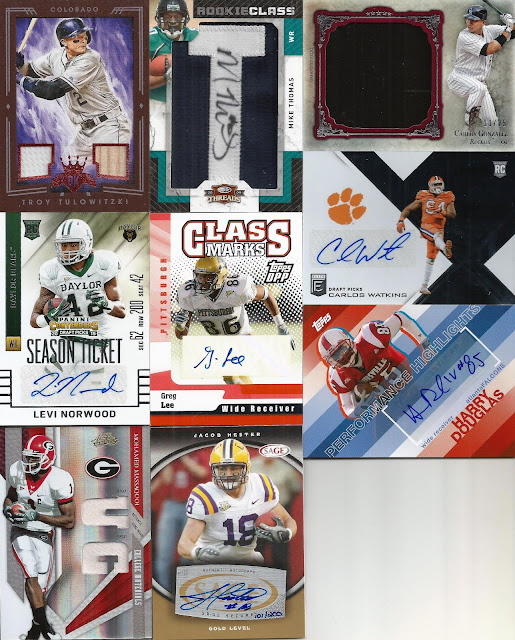 The abundance of college cards in this post mostly came from the $0.50 box, and I figured if nobody who reads this wants them, they can head to TCDB, but regardless, the price was right!  That trio up top--a pair of nice Rox relics and a manu-letter auto--seem the most likely to be claimed, in my opinion. 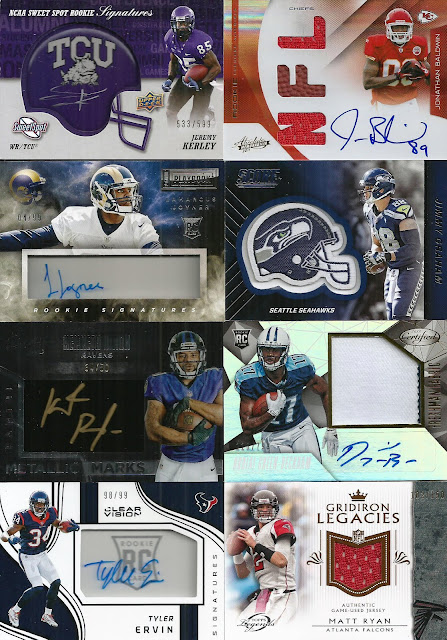 Again, most everything here was in the $1 box, so I didn't mind that most of the names weren't big, besides that Matt Ryan jersey.  I went for stuff that I figured could have broad interest--autographs on different surfaces, auto/relics, and just cool stuff in general.

As always, if you see something you're interested in, please let me know in the comments and we'll work out a trade!  Eventually I'll get what doesn't get traded up on TCDB since I've got a pretty nice pile of interesting trade bait that I hope turns into Michigan and baseball PC stuff.

And now we'll head to my pickups from those various collections:

It was another small but productive day for a few of my collections.  First up is a 2007 Chrome White Refractor of former blog namesake Curtis Granderson, #d 468/660.  I think the White Refractors were underappreciated so I happily grabbed this one that includes what I think of as a fun photo, a rarity for a Topps card.  Although I thought I'd picked up more toward this rainbow I actually only have the flagship base to go with it, so hopefully I'll track down more in the future.

Next is Hank Greenberg from the very familiar 1987 Hygrade set.  You'll get to see much more of him and other Tiger greats in future posts when I get around to my latest Sportlots effort.

One of my biggest surprises of the day was that Maddux you see above--his 1998 Donruss Diamond King (#03063/10000).  That was on my singles wantlist, and the key word there is "was" because I happily crossed it off when I got home, leaving me short just Ripken's card in terms of my PC guys in the set.  Man, do I love these!

Speaking of Cal, I found his Superstar Spotlight subset issue from the base set of Upper Deck's 2000 Ovation product.  I'm pretty sure I remember these textured cards being overpriced when they came out, but when you can get 'em cheap these days they're fun to pick up.

Last up on this side of the collection is a surprising first for me:  hit #1 of former Tigers 2B Ian Kinsler.  I'm sure I've said multiple times that I was already thrilled when Detroit shed the bloating contract (and carcass) of Prince Fielder, but to get Kinsler and his production was nothing short of a coup.  He's one of my favorite recent Tigers, and I was happy to see him get a ring last year, even if it was with the Red Sox.  So welcome to the Tigers hits collection, Ian! 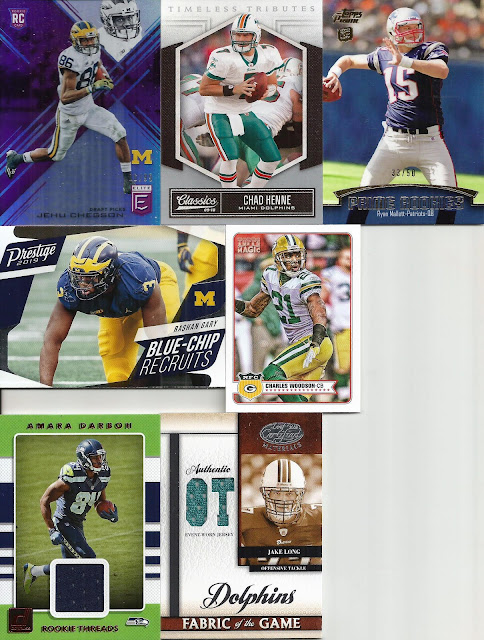 We'll end with a couple more results from the dollar box.  I think I recall seeing both of these cards in what was originally the $2 box at the last show or two, but they didn't make sense at that price; cut it in half and I'm all over them, though.  First is a 2017 Donruss Rookie Threads Red jersey of WR Amara Darboh.  As far as I can tell, the non-numbered parallels of these relics are determined by the color of the foil used for the player's name, set title, and logo.  I'm just happy to take whatever I can get of one of the more interesting receivers from recent teams, plus this gives me 30 hits out of 40 cards, one of the craziest ratios in my collection!

He's joined by the more well known Jake Long, the former #1 overall pick whose position is clear on his 2008 Leaf Certified Materials Rookie Fabric of the Game Position dual jersey (#074/100) seen here.  I'd call a buck the sweet spot for a card like this that comes with an "event worn" jersey swatch from the Rookie Premiere, so in his collection it goes as hit #83 out of 128 cards, which is getting into Darboh territory.  Thanks to recent-ish (COMC) acquisitions Jake is fourth in the hits collection, a couple behind Braylon, but with a distant lead over #5 guy Mike Hart's 68.  Who knows what those standings might look like by the end of the year!

I hope you all enjoyed this show recap, and you may be able to look forward to a few trade packages around the blogosphere featuring even more stuff not seen here.  Speaking of envelopes, I'll have a new one to show off in my next post.  Until then I'll be watching the Astros and rooting for JV's team to do the world a favor and eliminate the Yankees!
Posted by Dennis at 7:53 PM