I'm back today with the third of the three trade packages that I'd mentioned arrived to me this month, meaning this is the "big" one, and in my experience, nobody does big like my #1 trade partner, Doug of Sports Cards From the Dollar Store!  This latest bubble mailer was absolutely packed to the gills and I'm impressed that he appears to have maximized the amount of weight he could send without the price skyrocketing.

This is another one of his signature envelopes stuffed with variety plus some heavy hitters, hitting many of my PCs all over the place, and I'm proud to be showing it off this evening: 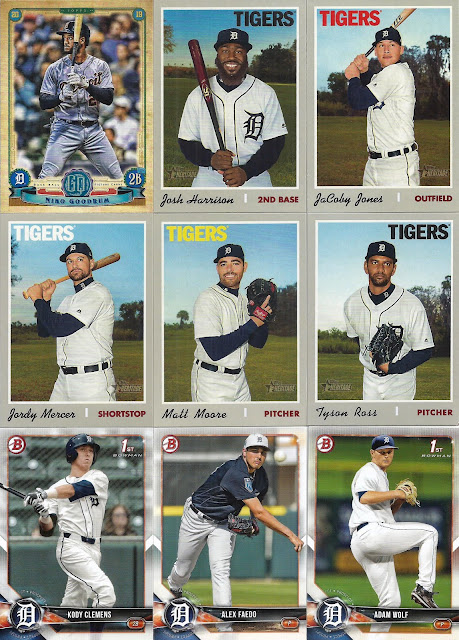 We'll start with the Tigers content.  Pleasant surprise Niko Goodrum leads off this group with his base card from this year's GQ, and then we go on a five-card run of 2019 Heritage High Numbers' classic design, with only Paul's favorite, JaCoby Jones, still with the team.  This scan concludes with a trio of 2019 Bowman Draft Picks of three of the teams' better recent prospects.  RHP Faedo seems to be the consensus best of the three, with Roger's kid getting some consideration, and 2018 5th-rounder Wolf not as highly thought of for now.  I hope Clemens pans out as the big league club could use all the hitters it can develop! 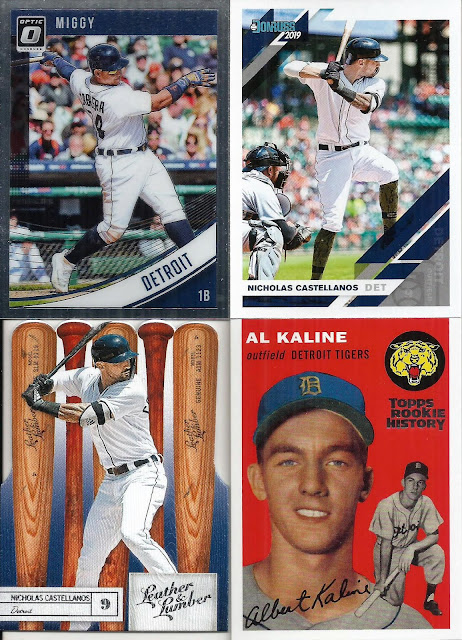 One of these things is not like the others!  Three of this four are recent Panini issues, with an Optic variation of Cabrera and pair of 2019 cards of happy Cub Castellanos, with the Leather & Lumber die-cut a particular highlight for me.  The scan makes it difficult to tell but not only are these cut--they're much thicker than the base cards.  I'm definitely a fan!  I'm always happy to see Mr. Tiger in a trade package, even another reprint from Topps.  I really need to get me a copy of the original! 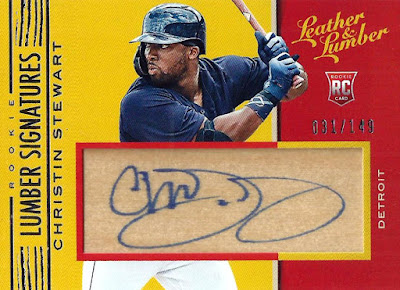 And we conclude the Tigers stuff with this beautiful Leather & Lumber auto of OF Christin Stewart, signed on a manu-lumber piece.  Doug broke a box of the product back in July and was generous enough to set this one aside from me.  It takes me back to the fun days of Fleer, Panini, and UD having players sign various pieces inserted into cards that simulated bats, balls, gloves, and more.  Stewart has an interesting signature and he's plenty young enough to remain an interesting prospect with potential to star in Detroit's outfield for years to come.  If that doesn't work out it's still a very cool card. 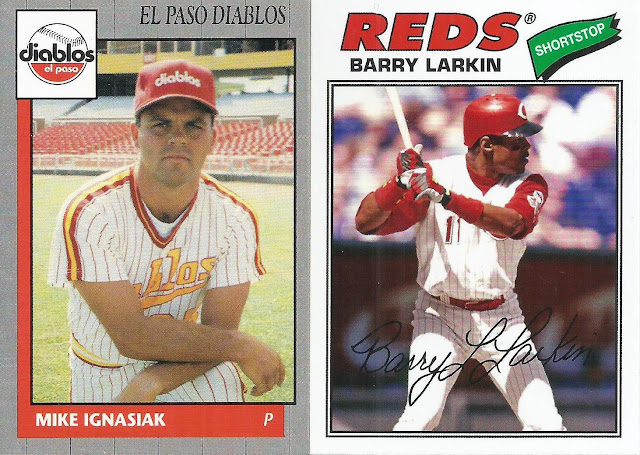 The baseball portion concludes with this pair of Michigan Baseball alumni, which is definitely a tale of two PCs.  Ignasiak's career was a short one and I have all 15 of his regular issues, plus this fun minor league offering.  Meanwhile, Larkin's Hall of Fame career led to plenty of cardboard appearances, and I own more than 750 of them! 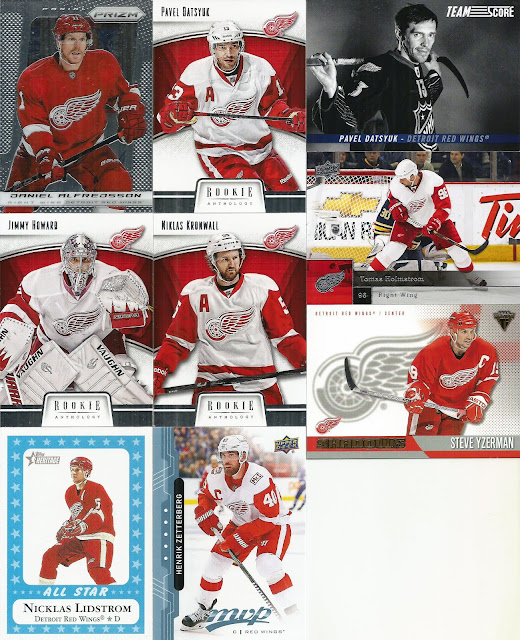 We now go back to Motown for a minute, specifically Hockeytown.  The Alfredsson that leads off this scan calls to mind that recent Twitter post that was going around, asking people what clue they'd use to indicate they were being held against their will.  Doug giving away an Alfredsson?  Blink twice if you're being held hostage, buddy!

This first of two Wings scans is chock full of franchise royalty, especially Datsyuk, Holmstrom, Lidstrom, Yzerman, and Zetterberg.  Pavel's second appearance is a very cool throwback to fun looks Score produced way back in the early 90s.  And the Yzerman has me excited to see what the Captain can do to rebuild a team that's fallen on hard times lately. 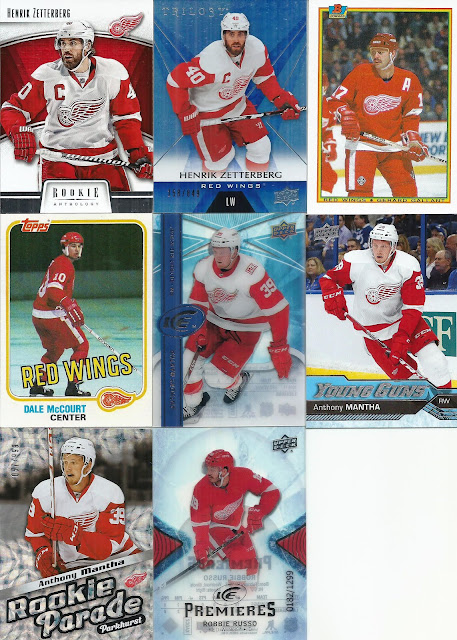 And even more Wings.  Gallant had some nice years as a player and went on to become head coach of Columbus, Florida, and currently Vegas.  McCourt was the #1 overall pick in '77 and put up four-plus very good seasons with the team, averaging around 30 goals.  The three cards of Mantha, especially the two higher-end ones (Ice rules!) are very nice gets of the 2013 first-rounder who looks like he'll be a solid contributor again this year.  Russo also stars on an Ice card, and a numbered one at that, and we'll see if the former Notre Dame D gets another chance after limited action in the NHL. 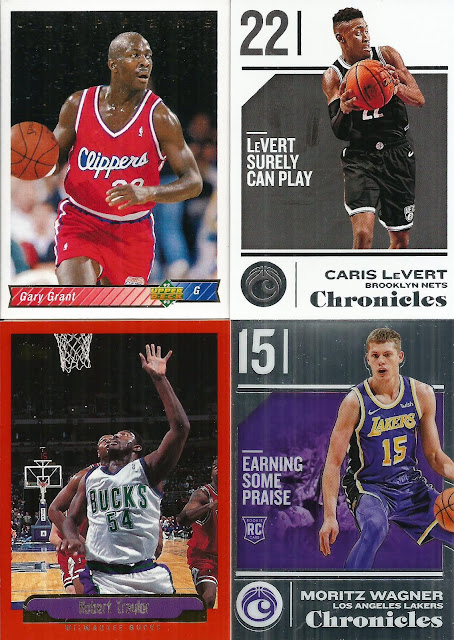 The basketball content was limited but very effective, which is great since it's my least favorite of the four major sports.  The Grant was new to me and I especially liked the pair of Chronicles cards of recent Michigan guys LeVert and Wagner.  LeVert just got paid, a three-year, $52.5 million extension with Brooklyn, and I'm happy to see him succeeding. 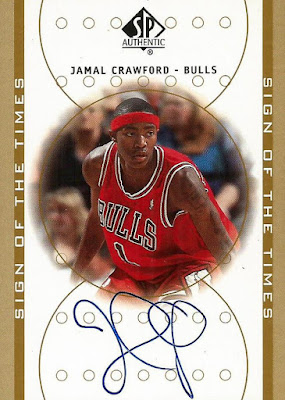 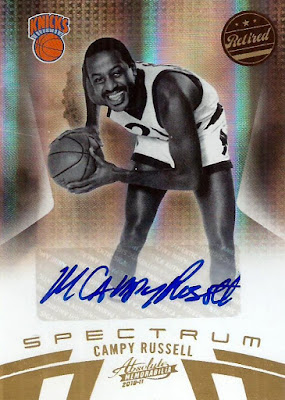 After a short break from hits in this post, here comes a fantastic one-two punch from the hardwood.  Old man Jamal Crawford, going into his 20th(!) season, appears here from his rookie year on a 2000-01 SP Authentic Sign of the Times auto, giving me hit #7 of the former Bull but also my first signature!  He's joined by a beautiful 2010-11 Absolute Memorabilia Spectrum Signatures Gold auto (#76/99) of the doubly-nicknamed Campy "Mr. Moves" Russell (who, again, wasn't related to Cazzie).  Michael Campanella Russell signs his first initial and nickname here which is very cool, and I loved getting this as my first hit of the former Cav/Knick! 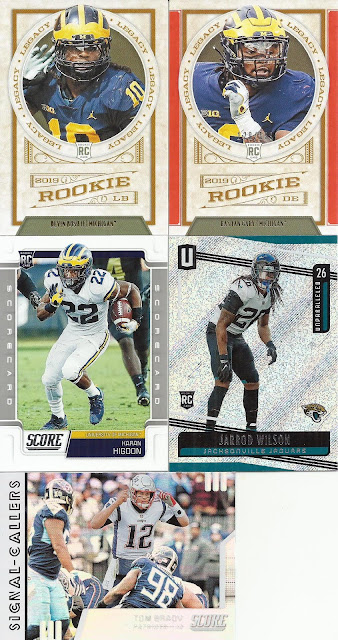 The Michigan portion this time was excellent as always.  Doug hit me with my second RC of tackling machine junior (David Harris will be #1 in my heart for a long time) Devin Bush II, from 2019 Panini Legacy, plus the only checklisted rookie of former UM DB Jarrod Wilson that I could find out of Panini's Unparalleled.  I owe him a special thanks for the latter since it doesn't appear on Beckett's OPG as a RC for whatever reason.

Joining those are a fun trio of inserts.  He added to my limited collections of these two players with an Orange parallel from Legacy of Rashan Gary (#129/199), who picked up his first NFL sack today, plus a Scorecard parallel of RB Karan Higdon from this year's Score, a couple more college uni cards, which are the tops!  A very shiny horizontal 2019 Score insert called Signal Callers of QB Tom Brady caps things off here. 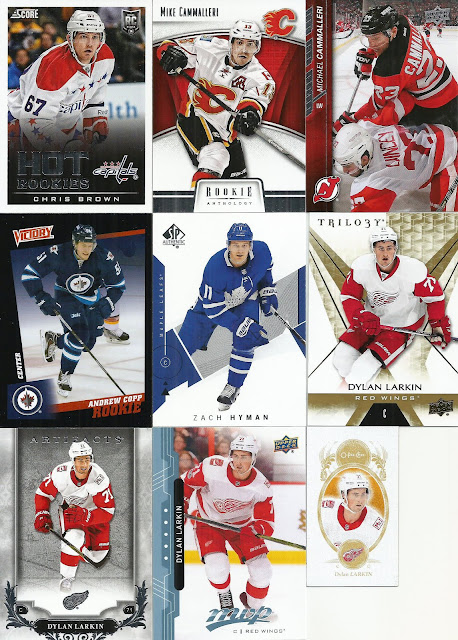 And at last we've made it to Doug's specialty:  Michigan Hockey content!  Almost everything in this scan was new for me, including three of the four Dylan Larkins, which I happily added to his PC, getting him up to 26 items.  I wasn't aware until receiving this envelope that last year's MVP product had a blue factory set version, so now I'm glad to know about them so I don't toss out others thinking they're dupes. 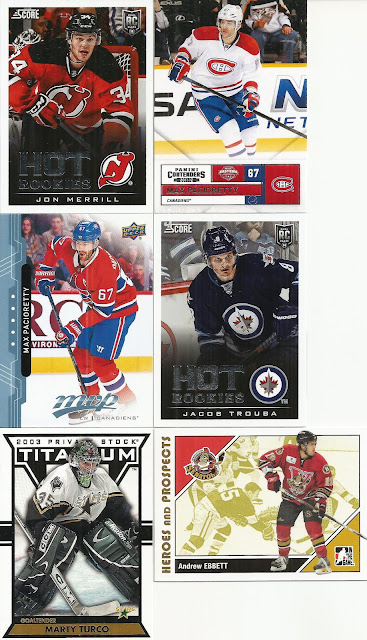 The rest of the "regular" hockey stuff includes a player you'll see again in a minute, a pair of Max cards, a brand new Turco, and a cool horizontal Ebbett that goes towards his very small collection.  Like the MVP Larkin above, I thought this Turco was a dupe until I noticed the gold foil at the bottom, making this the base version of 2002-03 Titanium, and the one I already owned the retail version.  I've since updated my collection to reflect those and am glad for the second cardboard lesson of this post! 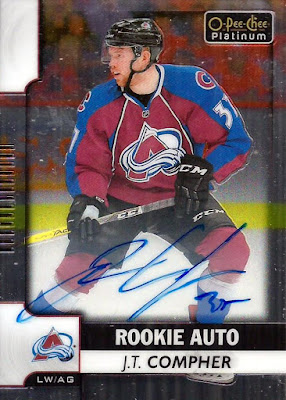 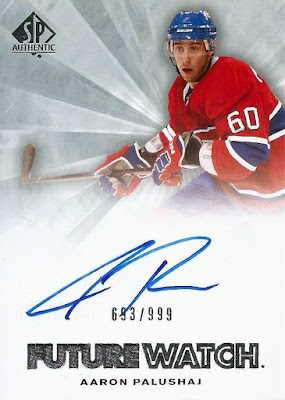 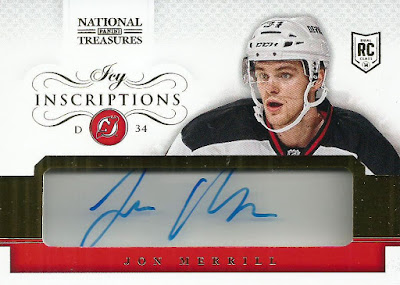 And here's the rest of the hockey with the big finish.  O-Pee-Chee's Platinum is another one of those products that looks outstanding when it gets chrome-ified, and Compher's auto (my second) above from 2017-18 looks even better in person, naturally.  I don't think anybody has sent me as many Aaron Palushaj hits (or any, for that matter) as Doug, and he upped the count with this 2011-12 SP Authentic auto/RC #d 693/999, making it the 11th hit (10 including signatures) in AP's collection.

And the star of the show is the previously-mentioned Merrill, another guy I'm constantly fed by my Canadian counterpart.  Hit #9 is this flat out stunning 2013-14 Panini National Treasures Icy Inscriptions auto.  I enjoy cards featuring acetate as much as the next person, if not more, and am not bothered when players sign a piece of something instead of the card itself (like the Stewart above), so this is another design that reminds me why I love collecting, and getting envelopes from Doug.  The number of times he's sent me cards like this is off the charts as he continues to be a boon to my hockey PC.

Doug, not that you could tell at all by reading this post, I thoroughly enjoyed yet another mailer from you and have to thank you for continuing to send me great stuff.  I plan on hitting you back at least once more, maybe after going on a Black Friday/Cyber Monday COMC shopping spree to bulk up on some quality content for a return.  Until then, good luck to your Sens!
Posted by Dennis at 8:56 PM