Recently I made my first trade since joining up on TCDB.  Technically it's my second since I picked out some cards from Paul on the site and we went through some of the process to create a formal trade, including both of us getting feedback.  But for the purposes of this series (I'm hoping there's plenty more to come!) I'm considering this one #1.

My trade partner was TripleCrown24, a guy who collects Tigers and Lions, and he initiated the deal by offering a wantlist card of one of my supercollection PC guys, asking for one of the Miguel Cabrera items on my trade list.  I then used the site's counter-proposal feature to add a bunch more Cabreras I had available for him, and a few more things on his trade list I was interested in.  I came out a bit ahead so I told him he could add more from my trade list but he was happy as-is.  Wanting to make a good impression, though, I tossed in around 25 Chris Sabo doubles I noticed he needed.

Heading back my way were 10 cards I'm happy to show off this evening: 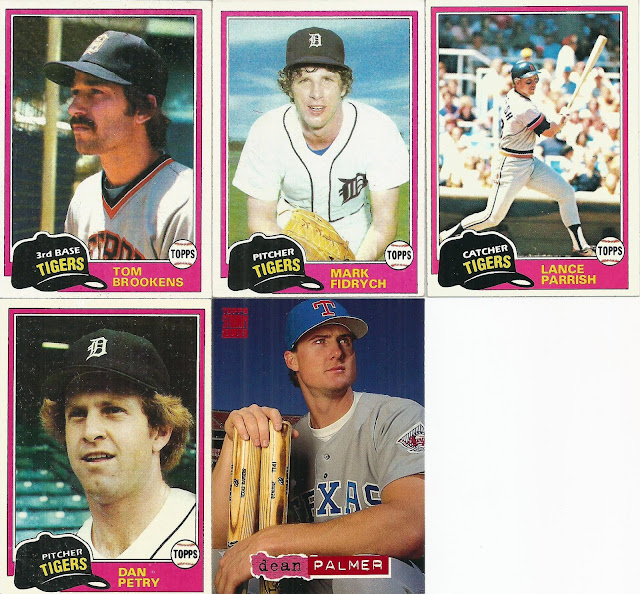 We'll start with a quartet of '81 Topps Tigers, which I picked out since I don't own the set.  The 1980 squad featured a number of contributors to the '84 champs, but you wouldn't have known it at the time.  Brookens was in his first full season (second overall) and put up a career high 2.5 bWAR as the primary 3B.  Fidrych sadly was unable to return to effectiveness after his injury and would be out of the majors after this season.  Parrish, one of my favorite Tigers catchers not named Freehan, socked 20+ homers for the first of seven occasions in his second full season (fourth overall) and capped off the year with All-Star and Silver Slugger nods.  And Petry went 10-9 (for the first of consecutive years) in his second big league campaign, the beginning of a season-season run of double-digit wins.

I tossed in a Stadium Club base of Palmer because he grew on me while with Detroit, probably because of his big bat in the 90s. 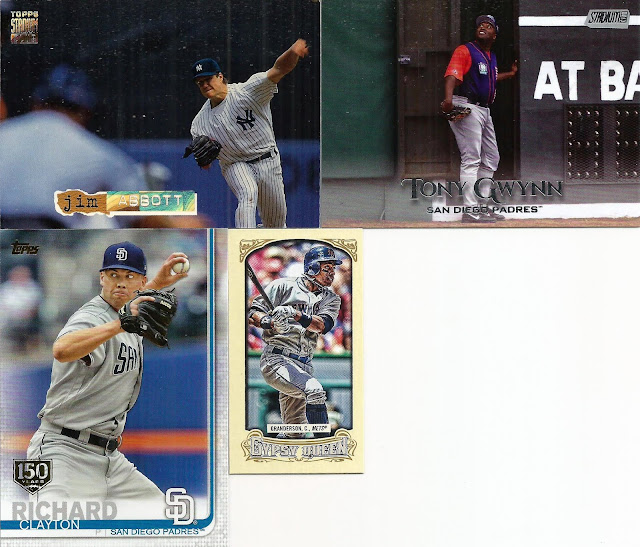 And then there's the baseball PC stuff.  The Abbott is a Golden Rainbow parallel from the same '94 Stadium Club set as Palmer's above.  I chose the Gwynn Stadium Club base from this year sight unseen because I knew it would be great, and it is!  Looks like Mr. Padre at the '99 All-Star Game at Fenway.  Speaking if this year's Topps products, supercollection guy Clayton Richard appears on flagship's 150th Anniversary parallel, the card that started this deal.  It's my 125th that I've tracked down toward his checklist and only the second from 2019.  Last up is a 2014 GQ Mini of former blog namesake Curtis Granderson, who's still a blast to watch no matter the uniform. 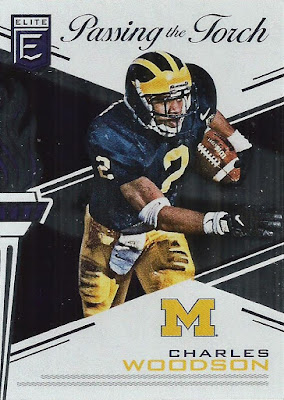 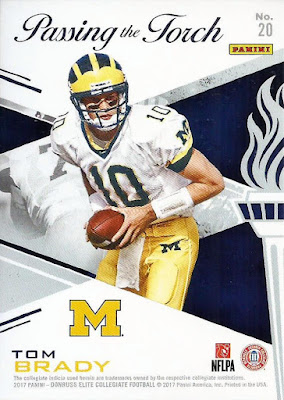 I also noticed one football card that piqued my interest:  this 2017 Elite Draft Picks Passing the Torch insert starring Michigan greats Charles Woodson and Tom Brady.  Gimme college unis any day, and especially cards of two of the greatest Wolverines ever to go on to NFL glory.  The player choice here is somewhat unorthodox since the insert typically pairs a legend with an up-and-coming guy, hence the "passing the torch" theme.  Regardless, they both earned NCAA rings in '97 and then won it all in the pros, so I'm happy to see them here together.

This is exactly the kind of trade I was looking forward to making on TCDB and I look forward to having more to show off, especially as I get my trade bait added.  Until then, consider this a thumbs up for trading with TripleCrown24.  And don't forget to hit my TCDB profile to see what wants and trade items I've gotten to!
Posted by Dennis at 9:51 PM