I enjoyed yet another fine Saturday at the monthly card show in Taylor a couple weeks ago, putting about an hour and a half (probably my average) into my favorite seller's boxes.  A nice mix from the usual denominations ($0.10 on up to $2) saw me spend a paltry but effective $25 on PC and trade bait stuff.  I think the biggest beneficiary of the latter this time was Matt of Parts of My Past, for whom I found a bunch of help for one of his set quests in the dime and quarter boxes.  A few others can look forward to some fun cardboard in the future too!

And now on to my haul: 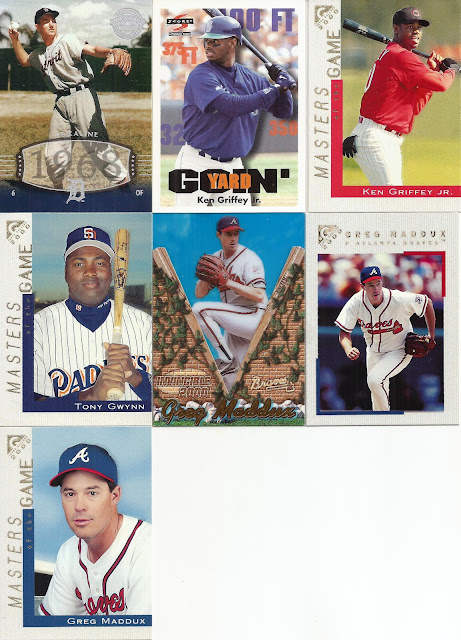 Mr. Tiger leads things off with one of his two base offerings from UD's terrific 2004 Timeless Teams.  As you can see, this one highlights the '68 World Series winners, while the other covers the excellent '72 team that fell to the eventual champion A's in the ALCS.  Maybe I should just get the whole set eventually since I like it so much!

Everything else on the baseball side fell into the Griffey/Gwynn/Maddux/Ripken grouping, which was just fine by me.  Most of what you see are cards from one of my favorite iterations of Topps Gallery--the 2000 version--while Junior and Mad Dog also got separate base cameos--'97 Score and 2000 Invincible.  Scanning these reminded me to add any base Topps Gallery stuff of all four mentioned players that I was missing to my TCDB wantlist, though I'm happy to report I don't have much left. 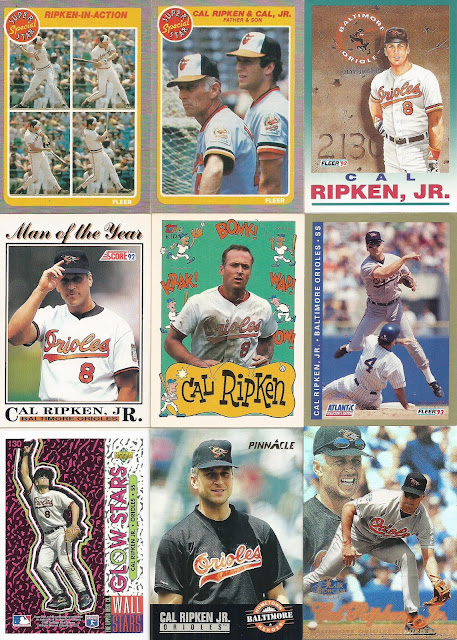 Cal was the big winner this time with 12-14 new cards.  We'll get to that disparity in a minute, but first we'll look at the vertical cards.  I think pretty much all of these came from the dime boxes so I wasn't terribly picky, just looking for new stuff.  It was fun to come up with the '85 Fleer pair, which includes a nice father/son card.  Most of the rest is a mixture of subsets and semi-oddball stuff, like Topps Kids, a Fleer Atlantic convention issue, and UD's Fun Pack.  There was no way I was leaving without that '98 Flair Showcase (Row 2) card, though.  Man, did those kick all kinds of ass. 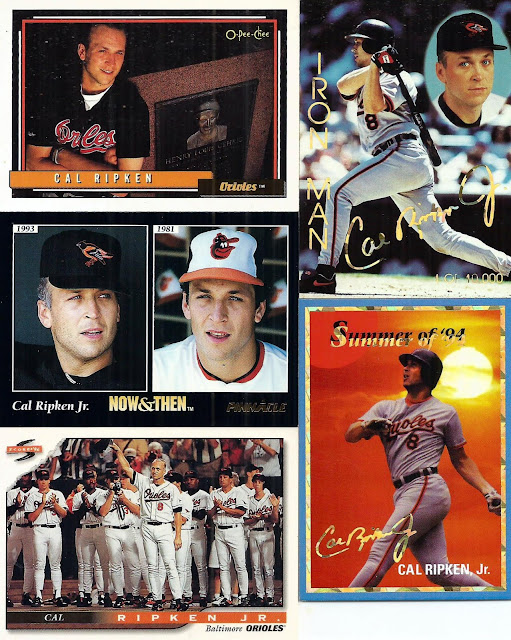 As usual a lot of what I picked up mentioned the streak in some way, like the OPC version of Cal's '92 Topps base starring an iconic photo with Gehrig's Yankee Stadium monument, or a beautifully simple '96 base with the legend enjoying his curtain call.  Then there's one more pair of vertical issues that couldn't be anything other than examples of the plethora of unlicensed stuff from the era.  I couldn't find either in Beckett's OPG or on TCDB, and didn't turn up much in Google searches either, so I'm showing them off here but not officially counting them towards Ripken's collection until I can correctly ID them.

In case you're curious, here's the backs of both: 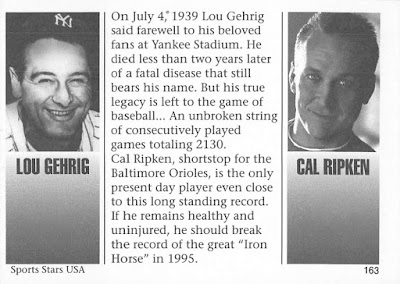 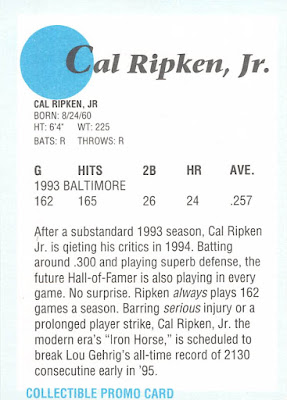 The day was less productive in terms of my Michigan collections, though sometimes that relative scarcity makes finding anything even more enjoyable.  I actually caught myself quietly saying "Woooow" as I pulled these inserts out of the dime/quarter/$0.50 boxes.

The first two represent PC QB Brian Griese, who's nearing the 200-card mark.  I was definitely not expecting to find something like the first card you see, a 1999 SkyBox Molten Metal Gridiron Gods Silver die-cut metallic card, which is a rarer version of an already cool insert.  Metal cards like these were a fun part of what was unquestionably the best era for collecting in my opinion.  That's joined by a Green parallel of his 2000 Score Complete Players offering.  Not the right color for a Michigan guy, but not bad.

Blog favorite PC guy (and also QB) Chad Henne gets us back on-brand with a Blue Refractor parallel of his 2008 Finest Moments card (#239/299) which, as a reminder, celebrates his performance in the 2008 Capital One Bowl victory over Florida.  I now have four versions of this card (Refractor, Autograph, yellow plate) and almost 300 cards of Chad. 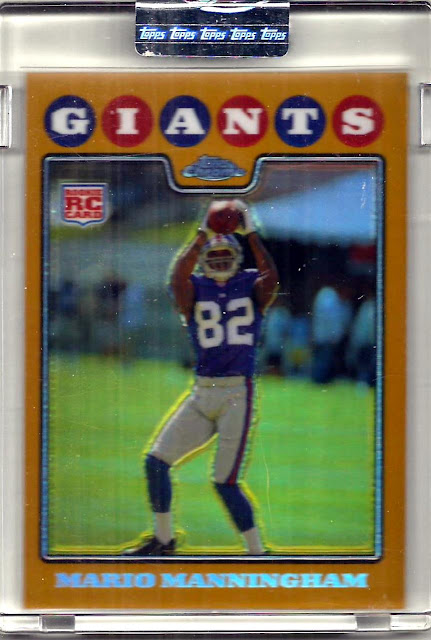 Last up today is the pickup that might have surprised me the most:  an uncirculated 2008 Topps Chrome Gold Refractor (#197/199) of some guy named Manningham.  I believe as little as $0.50 was enough to make this mine, but I definitely would have paid more if necessary because I enjoy the occasional sealed card, plus Gold Refractors just look awesome.  So, yeah, I was just a bit excited.

With college football returning to Ann Arbor and the rest of the country I'll have to see how September's show fits in with my schedule, but one way or another I hope to be showing off pickups from there next month.  Until then I have at least one trade package ready to go, plus a nice mix of other stuff, including some very rare eBay pickups.
Posted by Dennis at 6:58 PM