Just a couple days after this one I came across another interesting deal: a guy a bit east of my usual card show was dumping three roughly medium flat rate-sized boxes for just $10. While I don't know that anything really stood out to me, not all of it looked like the usual junk wax crap, plus some newer cards were peeking out, so I thought it would be worth the low price and drive. Granted, the cards were mostly flung willy-nilly into the boxes, so I could expect some condition issues. Still, why not see if there was anything useful for me and in terms of trade bait?

As it turns out the seller was trying to make a few bucks getting rid of these after selling his better stuff earlier. I didn't think to screenshot the Facebook post before he deleted it, but this might give you a good idea of what I brought home: 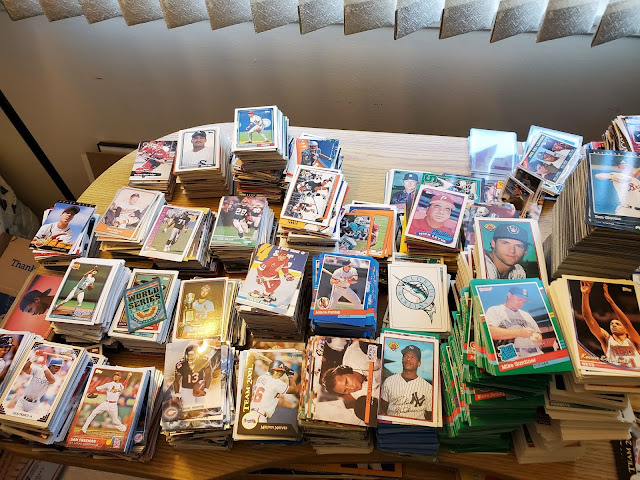 With the exception of some of the stuff in the upper-right corner, this is it. Yes, plenty of junk wax-era stuff, and I've filled up more than one of the boxes so far with stuff that was damaged. But before taking into account anything else, I'm happy to say that I was able to parlay some 600-800 of these cards (plus a few more I had on hand) into my (at-the-time) biggest TCDB deal, one I'll show off soon. In addition, I've got some fun stuff to add to future trade packages, plus a nice chunk of set-fillers I'll likely toss on TCDB. Before I do that, if you have wantlists for the following, please feel free to send them my way:
I'm still going through everything once in a while to pull teams/players that I know some of you collect, and trying to weed out more of the stuff that's damaged enough that it's worth tossing.

Besides all that I kept some stuff for myself. A lot of it was like the rest--fairly dinged up cards from the late 80s/early 90s, but I enjoyed adding new items for some of my favorite players, especially some of my neglected Tigers PCs. Here's a look at all of that: 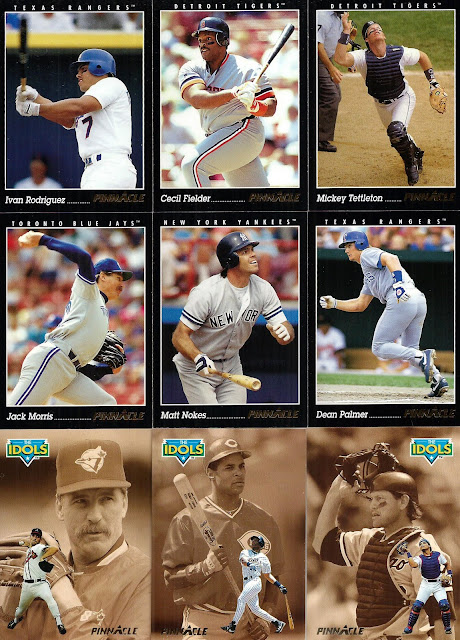 Item #1 is a near set of 1993 Pinnacle Series I baseball. Of all the sets that were pretty close to completion, this is the only one I kept since I couldn't see putting in the time or resources to chase the ones I wasn't interested in that much. Made a year before Pinnacle switched to a design that I think really improved things, this one's still pretty sharp, and the 310-card series includes some very good names, some of which I collect. I want to say after accounting for what I already had handy I'm about 20 cards away from this one, most of which are naturally bigger stars the seller pulled, but that's fine, I'll get 'em eventually. And look at all the new additions above, including guys I'm putting more focus into recently, like Tettleton and Palmer, plus a Barry Larkin I somehow didn't have! 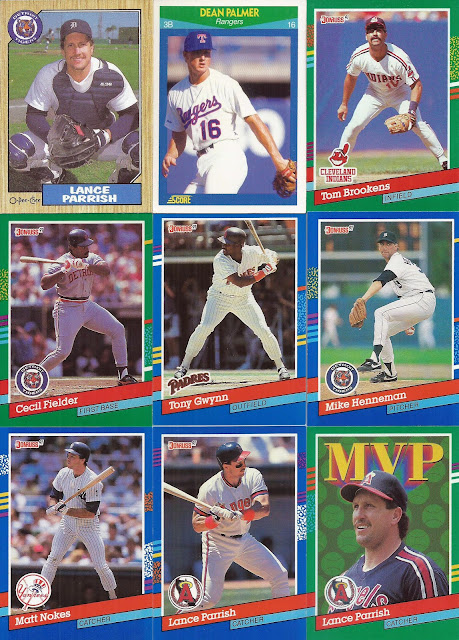 Now we get to the first of five scans of general baseball additions. You'll see some of these guys a few times, like former All-Star C Lance Parrish, on '87 OPC and '91 Donruss, which was the biggest source for new stuff this time. Palmer's from a '90 Score boxed set that wasn't too far from complete, but pretty distant from being in reasonable shape in general! I even found a couple new Gwynns, and cards of former Tigers with new teams like Nokes, another fun catcher. 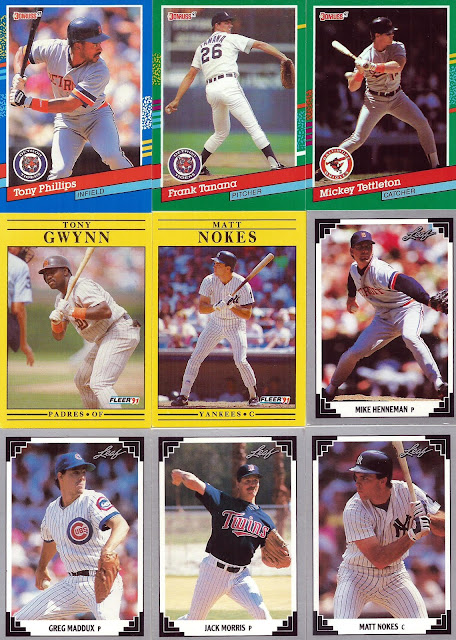 Tony Phillips is another guy whose collection I've added to lately, and he's part of a trio that finishes up '91 Donruss. Then we get to the love-it-or-hate-it Fleer set from that same year, as well as Leaf's second standalone issue, which include another Gwynn, even more Nokes, and the first of a couple Maddux adds. HOFer Jack Morris makes his first of a couple appearances too, besides the '93 Pinnacle you saw above. 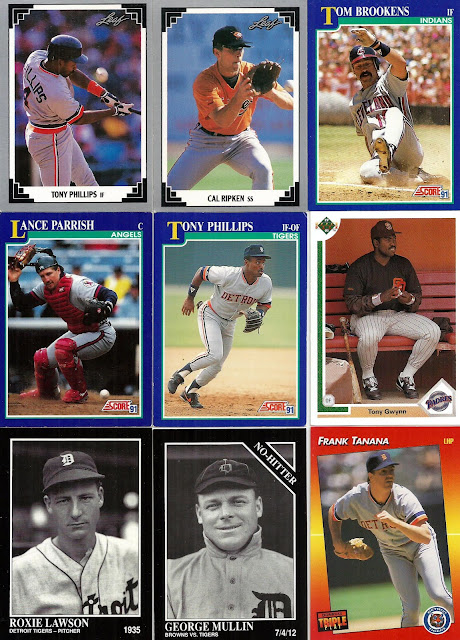 I seem to have forgotten just how many of the cards I kept were from 1991! The top two rows here finish up that year, with more Leaf, plus Score, and UD. It was great seeing the versatile Phillips back in a Tigers uni, maybe as much as it was weird to see Brookens playing for Cleveland. Gwynn gets a second appearance while Cal makes his lone cameo today, continuing his march to 1000 items in my PC. Then we jump ahead to '92 with Conlon and Donruss' Triple Play. Lawson was a Tigers pitcher in the '30s while Mullin pitched in the opening decades of the 20th century and put up some nice numbers, plus he no-hit St. Louis on Independence Day of 1912. Tanana was in his eighth and final season in Motown when the card above was made, and the next year was his sunset season. 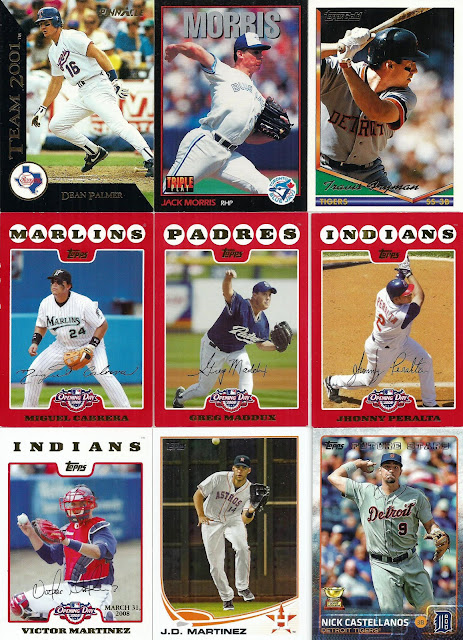 Future Tigers 3B Dean Palmer was one of 80 members of Pinnacle's Team 2000 insert in its 1992 debut release, then made the cut for the following year's 30-card Team 2001 insert. I did a quick check and I believe only five of those 30 failed to have a career that lasted at least until 2001. The back of Morris' '93 Triple Play card notes that the former Tiger who'd just won his second straight ring had set an AL record by making his 13th straight opening day start. Fryman was the only '94 Topps Gold card relevant to my collections

Then there's a big jump forward to 2008. I like how that year's Topps Opening Day base cards had red borders, differentiating them from flagship nicely. The white V-Mart card is a gold parallel /2199. J.D. and Nick start a little run of Topps cards of former Tigers from the last decade. 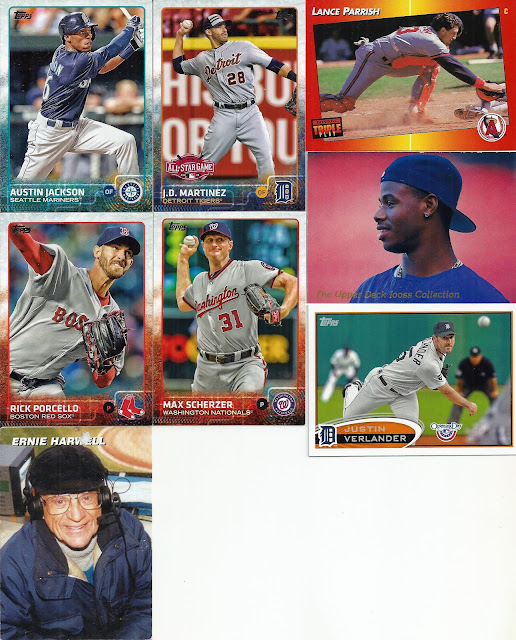 The last of the baseball concludes with this interesting mix, including four more ex-Tigers from 2015 Topps/Update, with A-Jax making a much appreciated appearance. An unlicensed Ernie Harwell Bible verse card makes for an interesting find and marks the end of the verticals. The horizontal stuff offers yet another Lance Parrish item, plus a 2012 Opening Day base of JV, and those two sandwich Griffey's lone spot in the lot, on the very cool 1993 Upper Deck Iooss Collection insert, which featured images by the noted SI photographer. That means my favorite quartet of Griffey/Gwynn/Maddux/Ripken was represented completely here! 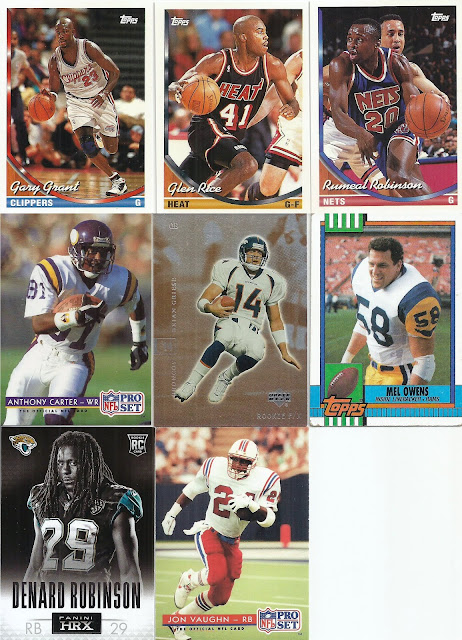 The other sports weren't nearly as represented, which is fine because I still found some keepers. I pulled three former Michigan Basketball guys from the '93-'94 Topps pile, including '89-'89 champs Rice and Robinson. On the NFL side, AC and Vaughn came from the huge stack of '92 Pro Set and Owens was from a group of fairly rough '90 Topps cards (on a design I definitely prefer to that year's baseball version). Meanwhile, PC guys Griese and Shoelace got adds from 2001 UD Rookie F/X and 2013 Prizm HRX Rookies. 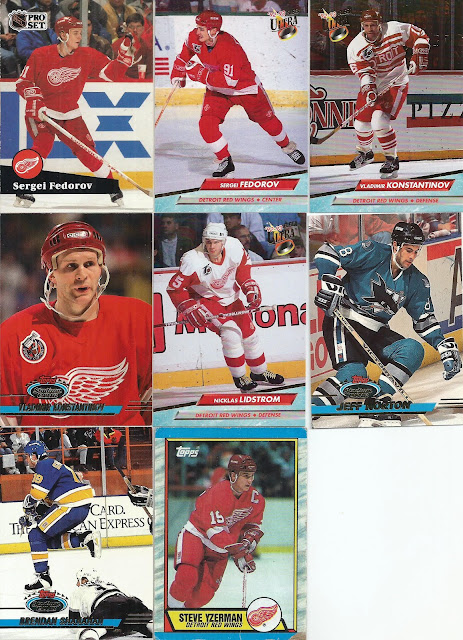 Last up is hockey, which was mostly a Red Wings affair. That's no big surprise given how close this guy was to Detroit. A good bunch of what I kept came from the sets I mentioned above in terms of what's available, which is awesome since Stadium Club and Ultra offered some very nice photography and designs. This group is a who's who of 90s Hockeytown greats, plus I snuck in a new card of former Wolverine Jeff Norton for good measure.

Hours (days?) of fun and a huge TCDB trade easily made this lot worth more than the $10 I paid, and I look forward to enjoying it even more by sharing more of it in trade packages with many of you. While I don't expect to find anything as good as the two purchases I've posted recently again soon, it's nice to know it's still possible. While I keep looking, stay tuned for that enormous TCDB trade recap whenever I get it all organized and scanned, unless it's interrupted by a new blogger trade package, which is always welcome!
Posted by Dennis at 5:16 PM