Well, it's happened.  I keep getting more cards in and then not posting them, so they keep piling up!  A couple recent purchases have a lot to do with that as I've been spending a good amount of time related to them on TCDB.  But I can't keep putting off showing off trade packages and other stuff, so let's go!

I can speak for everyone when I say I'm glad to see the return of Tom of The Angels, In Order, to blogging and trading after a heartbreaking loss in his family.  In the face of something like that, anything like collecting takes a back seat to more important things like taking care of your family, but sometimes the distraction can be nice as well.  And in my case, when my stepdad passed more than a year before I was blogging here, looking over the boxing autographs I bought for him helped remind me of the fun we had watching the sport together.

With all that to deal with I wanted to emphasize that I appreciate Tom being back and I hope we can all help him in some small way.  For my part I'm looking forward to sending him some more of the Angels, Patriots, and checklists he loves to accumulate.

I definitely need to do that anyway since he was nice enough to send me a PWE filled with Tigers.  "Happy new baseball season!" said the note, sent well in advance of the coronapocolypse.  Oh well, we'll get back to sports when it's time, and for now I'll enjoy some new cards: 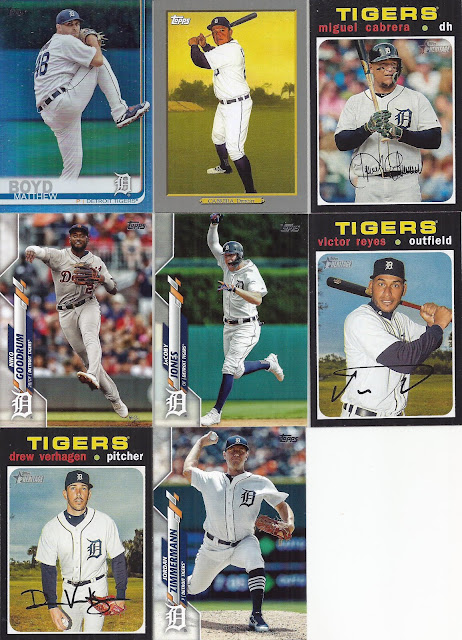 Part one is a nice bunch of 2019 and 2020 stuff.  Talented up and coming P Matt Boyd, a.k.a. John's guy, reps the former on a 2019 Rainbow parallel.  I hope over whatever portion of the season gets played he shows more of the stuff that got folks excited about him last year.

The 2020 stuff is split into flagship and Heritage, and I believe all of it is new to me.  Miggy hits both with a Turkey Red insert and Heritage base, the latter done up in the classic '71 Topps design.  The Turkey Red cards are interesting because they maintain the look of past versions other than the matte finish.  Three guys give me examples of the 2020 flagship base Tigers--utility dude Niko Goodrum (nice action photo), Paul's favorite, JaCoby Jones, and--barf--Jordan Zimmermann.  JZ and his albatross contract will at least be gone after this season!

Joining Miggy from the Heritage set are OF Victor Reyes and P Drew VerHagen.  Detroit plucked Reyes from Arizona in the 2017 Rule 5 draft, and he put up a decent showing last season over 69 games, so he may have a shot at a bench spot.  VerHagen was kind of a swing guy and was released by the team late last year so he could sign in Japan. 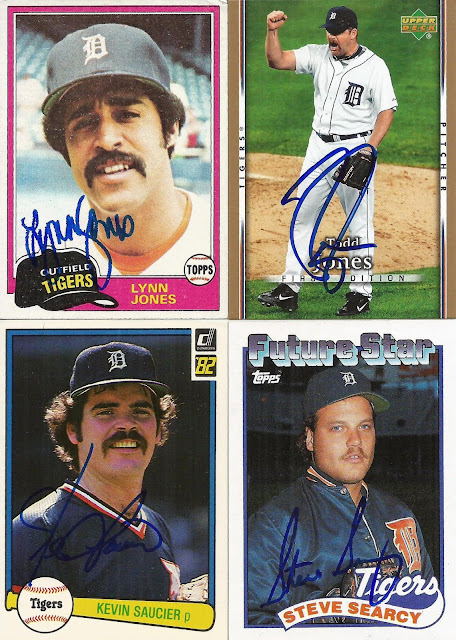 That pile was nice enough but this quartet of TTM/IP autos totally surprised me!  I'm familiar with all except Saucier, so it's off to Baseball Reference once again!  Lynn Jones, who signed his '81 Topps card, was also a Rule 5 guy, and was in Motown for five seasons, missing out on the '84 team but earning a ring with the Royals the following year.  His younger namesake Todd ('07 UD First Edition) was a notable closer in Detroit after coming over from Houston, and was reacquired for the 2006 World Series season.

Saucier ('82 Donruss) joins his fellow players from the decade in a "How 80s can you look?" contest, and he apparently came to the Tigers from the Rangers after being a PTBNL in their deal with the Phillies, with whom he won a ring in 1980.  And lastly, Searcy's ('89 Topps) name is one I remember well from the junk wax-era cards that touted him as a "future star".  Though he didn't live up to that billing he did last five seasons with the Tigers and Phillies.

Tom, once again it's great to see you trading and writing, and I'll certainly be returning the favor with some cards for you once I have the ability to accumulate more to go with a few I already had set aside.  Welcome back!
Posted by Dennis at 3:13 PM